Captain Sidney Crosby was honored by the Pittsburgh Penguins for reaching 1,000 NHL points before facing the Detroit Red Wings at PPG Paints Arena on Sunday.

Crosby scored his 1,000th point on an assist on a Chris Kunitz goal 6:28 into the first period against the Winnipeg Jets on Thursday, while standing in a spotlight close to the Penguins bench a few minutes before the opening puck drop.

Lemieux held a plaque donning Crosby's No. 87 made from the roof of Pittsburgh's Civic Arena, home of the Penguins from 1967-2010. Crosby skated to Lemieux, hugged him and posed for a photo as the crowd cheered.

Earlier Sunday, Crosby's teammates honored him in the locker room before their pregame meeting. Long-time teammates Evgeni Malkin, Marc-Andre Fleury, Kris Letang and Kunitz presented him with a golden stick displaying the dates and opponents of his first and 1,000th points, and every 100 points between.

Those four also gave Crosby a stick-holder, made from the Civic Arena roof, for the golden stick and his stick from the game against Winnipeg. 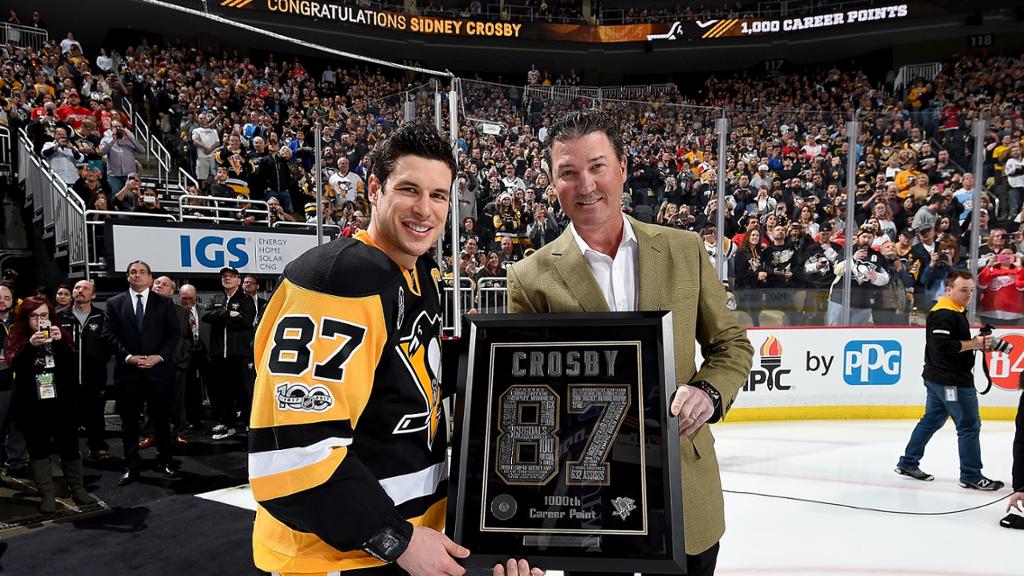 In the lead-up to his 1,000th point, Crosby tipped the puck away from Jets forward Blake Wheeler in the crease before fighting him off in the left circle and passing to Kunitz, who one-timed a shot past goalie Connor Hellebuyck.

After Kunitz's goal, Crosby skated to the bench, where he was greeted by his teammates as the crowd chanted his first name. He hugged Fleury while the Penguins played a video tribute that included several of Crosby's milestone points throughout his 12 NHL seasons.

Crosby had two more points against Winnipeg on Thursday, including the overtime goal with 21.1 seconds remaining.

Crosby's first NHL point came in his first game on Oct. 5, 2005, against the New Jersey Devils at Continental Airlines Arena. He assisted forward Mark Recchi on Pittsburgh's only goal at 5:36 of the third period in a 5-1 loss.